FREE AND EXPRESS SHIPPING FROM 24 HOURS FOR VARIOUS PRODUCTS

Blue stone tiger eye bracelets represent confidence. It serves as a reminder for the user to always believe in themselves, regardless of adversity.

You're beautiful Natural Stone Blue Tiger Eye Bracelets it is made of semi-precious pearls, also called blue tiger's eye, whose colors can vary from blue green to grayish blue. It is said of the hawk's eye that he is the guardian angel who sees everything. 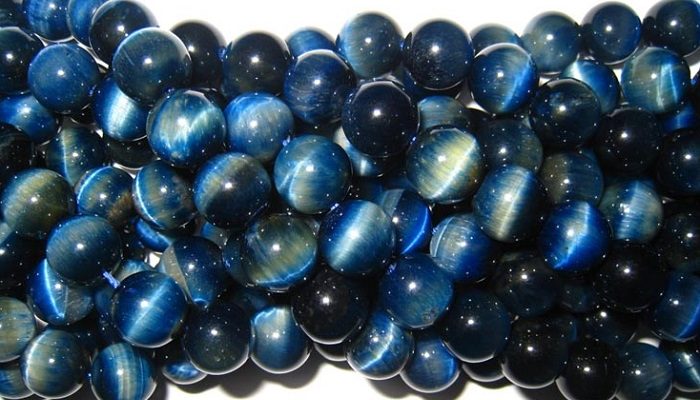 Tiger Eye is a variety of limonite-containing quartz, its crystalline system is trigonal in shape and its constituent chemicals are mainly silicon, oxygen and iron.

It is one of the most loved stones and known for its beauty, but at the same time for its moderate price and the countless qualities. It is used especially as a jewel in jewelry making.

Since the Middle Ages, but probably a long time ago, the Eye of the Tiger has been considered a very powerful protective charm, able to ward off evil eye, evil spirits and any harmful or contrary influence.

The effect of light on its surface called “gattezione” resembles an eye in which the sun's rays are reflected; It is precisely for this reason that, in addition to the protection against the evil eye (precisely “bad aspect”), this stone has always been used to cure vision problems.

The Eye of the Tiger is governed by Earth and the Sun, a female and male archetype, both representing abundance, prosperity, and wealth: this semiprecious stone is therefore a valid help in enhancing our health, our well-being, and the harmony of our lives. vital forces as well as material wealth.

It helps to overcome difficult times, defend against oppressive situations, maintain control and get in touch with homeland security. Thanks to its ability to slow the body's energy flow, the Tiger Eye promotes centering and instills courage and self-confidence.

At the same time, it exerts a pain-relieving action. It is recommended, however, not to use it for too long (maximum one week).

Tiger eyes are found mainly in South Africa, but also in Western Australia. There are also deposits in India and China, Myanmar, Namibia and Canada, in addition to Ukraine and the USA. At the Mineralogical Museum of the University of Bonn, you can admire since 2008, the largest specimen ever found in the eyes of a tiger. It weighs 150 kg and is two meters long.

In general, tiger eyes are very common in the world, even if there are regional accumulations mentioned.

Wealth and blue eye of the tiger

A Blue Tiger Eye stone will help you increase your confidence, so carry it with you wherever you go.

The Blue Tiger Eye stone can help you gather the strength to get closer to the person you care about, and if you are already in a relationship, can help you solve current problems.

The tiger eye wearer is said to have more courage and protection, as well as security. Because the stone refines the senses and helps with important decisions. Tiger eyes are considered strong healing stones that support bones and joints.

Even with asthma and shortness of breath, the stone can help very well. The stone strengthens the liver and bladder, has an antibacterial effect and helps with colds of any kind. The blood sugar level must be regulated by this stone, supposedly harmonizes hormones about functions and relieves spasms.

Online with cards and trans. banking (some countries)